Our next port of call was Bardia National Park, 8 hours or so West of Lumbini by bus. We had first head of Bardia from an Australian guy, and fellow Bollywood extra, who told us that it was his favourite place in 2 years of travelling. On his recommendation we had booked into a place called “Mr B's”, and the friendly Mr B picked us up from the bus stop to take us to his guesthouse by jeep.

The reason for our trip out to Bardia was wildlife spotting. Whilst Chitwan is the most popular National Park on the tourist route we had read that Bardia offered the same levels of wildlife activity without the same crowds. Unfortunately our visit was smack-bang in the middle of the wet season and therefore the worst time of year for wildlife spotting, but we had been assured that if anyone was going to find wildlife for us to spot it was Mr B.

Our options for wildlife spotting at this time of year were limited, but we opted to go for a rafting tour. We thought the tour seemed a little pricey, however it soon became apparent that Mr B had assembled a crack unit of wildlife guides and rafters who may or may not survive as soldiers of fortune – The B Team!


The day consisted of rafting down the river while Mr B pointed out various birds as well as a few crocodiles (one of which was spotted only when it was a few metres away, prompting some rapid paddling to get a safe distance away), but mainly kept an eye out for signs of the bigger animals. Periodically Mr B would spot some fresh elephant or rhino tracks and we would disembark from the raft to track the animals through the jungle on foot.  In reality it was Mr B tracking the animals while we did our best to track Mr B as he breezed through the dense jungle as if it wasn't there (he just seemed to move at the same speed irrespective of whether we were walking on grass, through mud, through dense undergrowth of through rivers).

Although we went quite a few hours without seeing anything it was already really enjoyable being out on the water and on the lookout for anything exciting and well worth what we had paid. The ever-eloquent Dr Ziebro PhD succinctly summer up her considered thoughts with the following statement: “I'm enjoying the crap out of this!”. It was really thrilling to see an expert tracker in action as he inspected tracks and excrement, assessed directions of movement by looking at broken branches etc, and even smelled out our targets. This was proper jungle too – grass up to head-height and branches and vines that needed hacking back to pass through as we wound through the trees climbing over roots and ducking under thicker branches. On several occasions we were definitely really close to finding rhinos or elephants, and potentially to turning a corner to come face-to-face with them, but eventually we had to turn back when the jungle got so dense that it would have been impossible to run away if one of the animals became aggressive. Mr B was clearly willing to take significant risks to find us some big animals, however even he had to draw the line somewhere, especially when we were tracking an inevitably protective female rhino with her young.

After lunch we made the decision to continue on foot for a while in the search for elephants. 30 minutes later Mr B received a message from 2 of the other guides who had stayed with the raft that there was an elephant. Unfortunately there was a mis-communication as to where the elephant was which resulted in Mr B leading us as fast as we could go through the jungle and through two rivers only to find out that the elephant was back in the direction we had originally walked from. Luckily the raft was able to return upstream to collect us, and then head back downstream in time to catch the elephant. We were able to get out of the raft and watch him from a distance, before we got back into the raft and were able to pass really close by him. 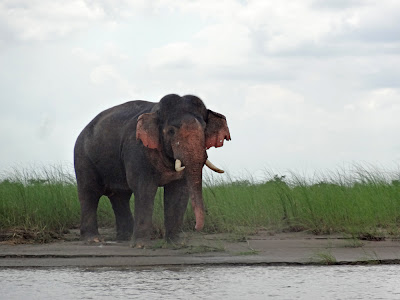 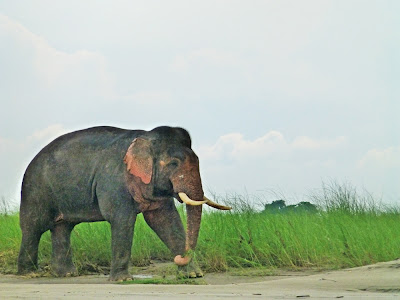 After that we headed to a look-out point where there was a chance of seeing rhinos. It turned out to be a rather good chance, as there were three rhinos on the other side of the river when we arrived there. It was really amazing to watch such rare and powerful creatures casually grazing on the grass (in a way not entirely dissimilar to cows) even if they were quite a distance away from us. 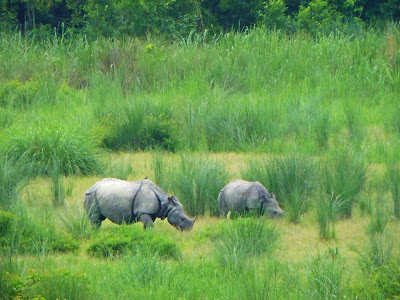 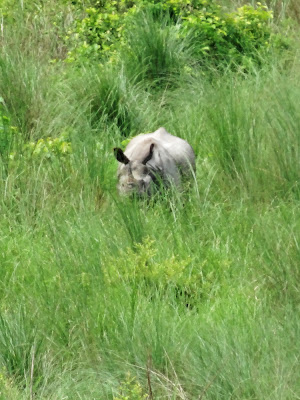 When we returned to the raft we found out that Mr B had heard heard a tiger roaring not far away. Mr B had also found fresh tiger prints which our lego explorer friend (a stowaway on the raft) inspected closely. 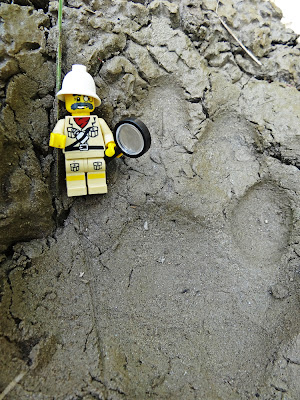 As we moved along the river we could hear the various birds and monkeys sounding out warnings that a tiger was near, however he unfortunately opted to stay in the undergrowth rather than come to the river for a drink. It was still pretty cool to be so close to a tiger, and probably as close as we could expect to be to seeing a tiger at this time of year.

Well satisfied with seeing three crocodiles, an elephant and three rhinos, as well as getting pretty close to a tiger, we started heading back. Completely unexpectedly we then came across our second elephant of the day, a huge male right next to the river bank. We steered nearer to get an even better look, however Mr B then recognised him as a notoriously dangerous elephant who had previously attacked local villages and killed people. He was clearly not happy about us being there, and he waved his trunk aggressively in the air to warn us off. Mr B and co very quickly started paddling away to get us out of harm's way as the elephant ran along the river bank to chase us off his territory. I never felt like we were in danger, but judging by the reaction of the guides it clearly wasn't safe to be as close as we had momentarily been. 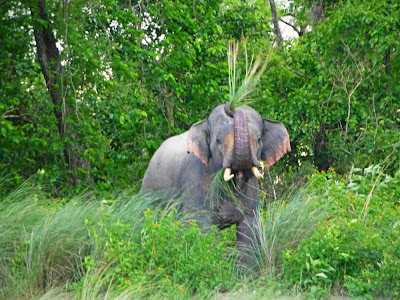 The day was completely exhausting but absolutely exhilarating. We were incredibly impressed by Mr B's skill and knowledge, and the dedication of his team to locating the big animals for us. I got the impression we would have kept going for as long as it took for us to see at least one elephant or rhino.